The capital of the ancient world. The cradle of our civilization. Mediterranean climate. Such terms should be enough to encourage you to visit Athens, the capital of Greece. Placing monuments close to each other, in the very center of the city, enables efficient movement between them on foot and makes Athens an ideal city for a weekend get-away. City-break during which you can see the main attractions of the city within 2 days.

That’s also what we did in Autumn 2018. For 90 EUR we bought flight tickets in Ryanair in two directions from Warsaw to Athens for an extended weekend. The flight on Thursday at 19:35 and after 2h40m at 23:15 flight landed in Athens. Return flight on Sunday at 17:25 and landing at 19:10. Flight times are perfect. On Thursday, we are both after work hours and we do not have to take an extra day off. (In Greece there is a difference of 1 hour against Poland). Below I am presenting a full relation of the trip without unnecessary wrapping in the bush to this beautiful and ugly city at the same time.

Well, second one entitles you to travel by subway between the airport and Athens (where normally ticket costs 10 euros). So if you only come to the weekend and the times of arrival and departure catch up within the metro, it’s worth it. We left the airport terminal after 23:30, so we chose the bus. Tickets can be purchased at the ticket office or ticket machines. In both cases, you can pay by card.
However, if you prefer transport with a smaller car, the Beat app is more popular than Uber, which works on the same terms.

When to go to Athens?

Autumn and spring are the best periods to visit Athens. Not only the prices are lower and there are fewer tourists than in the season, but it is also still warm compared to northern Europe (At 24 November the temperature fluctuated around 18-19 degrees during the day.)

Additionally, in the period from November 1 to March 31, i.e. outside the main season, all visitors are entitled to purchase discounted tickets, which are twice cheaper than normal ones (in addition to the combined ticket).

Some of the places are small and you can see them perfectly without having to enter their area and buy tickets. For example, you can walk around the fence of the Roman Agora and see more than from inside.

Most places are paid. However, there is such a thing as a Ticket Package for most of them. It costs 30/15 euro (Normal / Reduced) (all year long) and entitles you to enter the following attractions:

The price of a combined ticket is not reduced during the low season. So in this period, check the attractions you want to enter earlier and recalculate whether it is more profitable to purchase individual tickets than a 30eur package for all.

I immediately inform you that these are not all available attractions and archaeological sites in Athens, but only those that we visited. I also present them in the order in which we visited them for two and a half days. We have not visited any museum, there are empty spaces in the Acropolis museum for exhibits that are found in other museums around the world. For example in London, Berlin or the Louvre. Sad but true.

A district north of Monastiraki Square. Our Hotel is also located here. At every step, you can find here interesting graffiti and unpleasant smell coming from the vacancies. You will not miss the homeless here, sleeping somewhere near the buildings. You can feel the immigration of the city, shops, and businesses run by people from the far and near east. In the central point of the district, there is a square surrounded by taverns and cafes, often full of people and it stands out against all other streets. The Little Kook Café deserves special attention, unfortunately, we were not able to enter because of long queues, but its surroundings are always well decorated.

The main place where people from the neighborhood meet and homeless sleep. The Hadrian’s library is located nearby, and you can buy souvenirs at the best prices in the area on the street from the square (Monastiraki Flea Market). From there, it is a straight road to the Acropolis.

Right next to Monastiraki Square there is an archaeological site with the Hadrian’s Library. The admission ticket costs 4 € (in winter 2 €). The area is so small that you can see this attraction from the street level.

Acropolis ( – the highest, polis – city) Ruins for which all come to Athens. They proudly tower over Athens and can be seen from almost every point of the city. Usually, we enter high points to admire the panorama of the area. In Athens, however, the best view is when you look at the Acropolis, rather than from it. The main building of the Acropolis is the Parthenon – a temple dedicated to the goddess Athena. Other objects that you can admire include, among others Odeon of Herod Attiki, or the theater of Dionysus. This is also the first spot to which we buy an admission ticket. Normally it costs 20 € of the larger part of the package for 30 €, but after the season the price drops to 10 € when the price of the package is not.

Temple of Olympian Zeus and Arch of Hadrian

When we left the Acropolis, we came across the Arch of Hadrian, and just behind it is the Temple of Olympian Zeus, or rather what was left of it. Only large columns were left. Here, we did not decide to go inside, but if you want to do it, entrance ticket costs 6 € (reduced 3 €).

A n ticket costs 5 € and reduced ticket 2.5 € (the off-season discount does not apply to this place, so the whole year is paid the full rate)

A free park lying between the Stadium and the main Syntagma square and the Parliament. A nice place for a return walk after a day of sightseeing.

The next day begins with visiting a small quarter at the foot of the Acropolis. Plaka is small but very picturesque.

The smaller agora in Athens and the newer, because it was from Roman times. This position is even recommended to go around because from the inside you can not see everything (eg ornaments on the tower). Admission costs 6 € (reduced / winter 3 €)

You have to buy an entry ticket to the Greek Agora because the area it covers is bigger than the Acropolis. The ticket costs 8 € (discount/winter 4 €). Inside, you can admire the best-preserved temples of ancient Athens – the temple of Hephaestus.

As we had some free time, we went to the Athenian coast. This is the only time that we have used public transport in addition to travel from the airport. One way Subway, and back by tram.

The Lycabettus hill is the perfect place to enjoy the panorama of Athens with the Acropolis and the bay, especially during sunset. If you do not want to go up the stairs 200m up, you can use the cable car, which will take you to the top for 7 euros.

On the last day, just before departure, we left the Parliament. An hourly shift of guards is carried out every hour before the parliament. However, on Sunday at pm the change takes place to the accompaniment of an orchestra and crowds of people who want to watch this spectacle.

In Athens, Kebabs, Souvlaki, Gyros in Pita bread are ubiquitous. You can pay about 2.50 euros for a portion in a small to-go pub, or even 8 € in a restaurant at a table.

Going along Ermou Street, we passed the Hot Hot Burgers, which had good grades on google maps. As a fan of burgers, I could not resist. The meat was well fried, the prices are not excessive, the fries . I can recommend it if somebody gets bored with kebabs.

In Athens, it is always good to have a view of the Acropolis, whether with coffee during the day or with a drink in the evening.

We visited a place called Couleur Locale for a drink. Very nice place, although finding it may cause little difficulty. You have to turn into a small street, and then go through a passage like a regular apartment block. The bar is surrounded by glass walls so that the wind does not bother you much. Drinks are in the price of around 8-9eur, to them we get water as standard and a small number of chips as a snack.

For coffee, we went to A for Athens right next to Monastiraki Square. For 2 coffees we paid less than 10 euros with tip. In Athens, I liked the fact that you always get water with an order. Whether it’s a restaurant, a bar or a café, it does not matter – always unlimited water.

e stayed in the Hotel Evripides, in which for 3 nights in a double room, together with breakfast, we paid less than 120 eur. I can say about the Hotel that it was cheap, clean and well located – It is located in the Psyri district, from where there is a straight road to the Acropolis. The hotel has a roof terrace, but during our visit, it was renovated. At floor below was a restaurant with a view of the city.

In total, for a 3-day, extended weekend in Athens for 2 people, we paid around 424 eur. 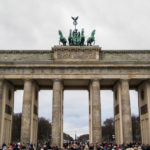 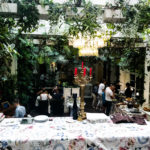