Koh Phangan is a small island in the south of Thailand. It is located exactly in the Gulf of Thailand in the province Surat Thani. Very calm on a daily basis, once a month during the full moon turns into a party-capital of Thailand.

How to get to Koh Phangan

Flight from Bangkok to Surat Thani and ferry

I spent a month and a half in Bangkok. It’s time to move to the islands. I chose a morning flight from Bangkok to Surat Thani with AirAsia. It cost me 1700THB along with luggage and breakfast on board. Departing from the DMK airport at 7:05 AM and after 1 hour of flight at 8:15 AM I was already at the URT airport. The next stage of the journey was a ferry to the island. Unfortunately, there is a piece of distance to the port from the airport. Luckily, shipowners offer direct transport from the airport to the ferry.

We have three main owners to choose from. They vary in price, travel time (regular ship or fast catamaran)

I chose Speed Boat from Lomprayah because it suited me the most and it cost me $22. I ordered everything online before, the full moon party was approaching and I was afraid that there might not be enough places on the spot. At 10:50, along with other people, we boarded a bus that brought us to the port where a catamaran was waiting for us. The boat has 3 stops: Koh Samui -> Koh Phangan -> Koh Tao. Each person got a sticker ticket in one of three colors so that the crew would be easier to organize boarding.

The sea of that day was very restless. A lot of people could not stand the journey and filled out the bags that the crew would give away. The catamaran first arrived in Koh Samui, where some of the people left the deck, and I was on Koh Phangan after another 30min.

To get from the port to the destination you have to catch a taxi called Songthaew. This is a pickup with benches in the back. The price is 100THB or 150THB if you live in a further and less popular part of the island.

You can immediately buy a combined ticket for a flight + ferry on the AirAsia website.

In Koh Samui, there is a very charming airport. I used it a week later when I left Koh Phangan and headed to Krabi. I saw that there are connections to and from Bangkok. So you can fly to Samui and catch a ferry to Koh Phangan. This route is served by other airlines and is much more expensive than a connection via Surat Thani.

I spoke to people who traveled from Krabi by bus. From what I found out, the Lomprayah company offers this option (Coach + ferry) at 900THB, others probably also.

During my stay on Koh Phangan, I worked like in Bangkok. I found 2 co-working spaces on the island. Koh Space and Beachub. Koh Space also became my home. At Airbnb, I rented a room there, and the place in the Co-working office was in the price. Koh Space is run by Charlie – a very nice guy. I can easily recommend this place.

The second Co-working space on the island is Beachub. A real beach office. I used their offer for one day. The view of the ocean during work was unearthly, but there was a lack of air conditioning. After all, you can not have everything.

The entry about my Digital Nomadingu in Thailand will be coming soon. That’s why I recommend following my blog.

Transport at the Island

As I lived in the Baan Tai area, in Koh Space, I was a bit away from the port town. To move around the island I had to rent a scooter just like on Koh Samui. It cost me 200THB a day and unfortunately I had to leave my passport. Apart from the scooter, the only option is a taxi bus (Songthaew), which drives the main road and can be caught there. Unfortunately, after the end of the full moon party, the traffic decreased and sometimes you could have stood a few minutes before one passed.

The most accessible beaches are on the western and southern sides of the island. To those lying in the northeast, access can be difficult or possible only by sea, for example to Bottle Beach.

A private beach on the north side of the island. It belongs to a nearby resort, but it’s available to all who are willing. The beach has a very fine, soft, white like flour, sand.

The beach is located on the northwestern tip of the island. There is a small island Koh Ma right on the beach. At low tide exposes a passage on it which makes it very attractive to tourists

Haad Salad – A very calm, not too big beach in the western part of the island, south of Mae Haad.

The beach is right next to the Beachub co-working. Just go through the small gate and you can already relax on the beach after work.

Beach on the southeastern tip of the island. Full Moon Party takes place on this beach. During the event full of people, at other times not so popular.

In the center of the island, there is a waterfall Phaeng and a viewpoint. The way to the top is not demanding but I do not recommend going into the flip-flops.

There are not many attractions on the island. When we use everything, what Koh Phangan has to offer you can go on a full day trip to Koh Tao for snorkeling- Apparently one of the best snorkeling spots on the coral reef in Thailand.

Another island near Koh Phangan. Koh Samui is bigger and more touristy. It even has its own airport and large resorts that are not on Phangan. I went to Koh Samui for a one-day trip on a scooter. 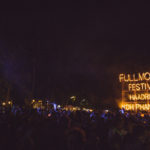 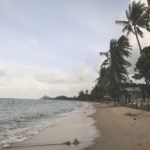 Koh Samui in 1 day on a motorbike