A proposal for people who like to sightseeing in an unconventional way. A attraction that does not appear in guidebooks. In the eastern part of Bangkok there is a airplane graveyard. Nobody quite knows how they got there, and why no one takes care of them officially. Why officially? Because some wrecks has become a home for a local Gypsy family, who charge a fee of 250-500THB for admission to “their” area.

If we are lucky, at the entrance we will be greeted by a man who understands English, if not, then a woman with a child who are looking after during his absence. For the “admission ticket” they demand 500THB, however, the moment of negotiation and the fact that I was not alone  but with an accidental other traveler, it was enough for us to pay 250THB each. I also heard the story that they did not want to haggle and took 600THB per person. Everything depends on the day.

Inside, on the left, the wrecks are converted into their home. I didn’t go there because of the respect for privacy, and I would not venture to disturb them. On the other hand, we see our main goal – the wreck of the great Jumbo Jet 747, which can be entered through the open luggage hold. Unfortunately, the area was not well groomed and covered with high grass, and that I was in short pants I did not want to meet some small creatures so I could not penetrate the whole area.

How to get there?

The attraction is located in the eastern part of Bangkok on a street that likes to get crowded at rush hour and it can take up to 2 hours to get here by taxi. However, there is also an alternative option. You can take advantage of the fact that near the canal is the last station of boat – Wat Sriboonreung Pier (E22) ท่าเรือ วัด ศรีบุญเรือง. The trip from the center will last about 45min and depending on which marina we will get, we will pay 10-20THB 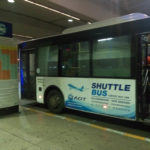 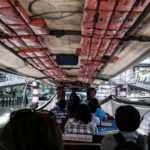 What To See in Bangkok