Koh Samui is an island in the Gulf of Thailand near Koh Phangan. It is larger (the third largest island in Thailand) and more touristy. I decided on a one-day trip around her on a scooter. I rented it right next to the Nathon Pier in the price of 200THB, and I had to leave my international driving license.

How to get to Koh Samui

While on Koh Phangan, I had an easy way to reach this neighboring island, which I could even observe from my kitchen. If you are interested in getting from another part of Thailand, I invite you to an entry about Koh Phangan, where I described possible ways to get there, and the methods presented also apply to Koh Samui.

The island has several ports to which tourist ships are landing. I wanted to spend as much time as possible on the island and after reviewing the site of the ship owners I chose the Nathon Pier in the western part of the island. It was important for me to come and sail away from the same place so that I could rent a scooter on the spot. On Ferrysamui.com I bought 2 tickets at a total price of $ 16:

The first point on the island tour was two Na Muang waterfalls. The first one was not particularly large (18m height), and the car park at it cost 20THB. Parking at the second was free, but the waterfall itself (79m height) was already on the paid area and the entrance cost 50THB. There is a path around the waterfall, which in some places requires light climbing and supporting with ropes, but I think it is worth it. At the very top of the path, there is a small pool, from which we can admire the panorama on the part of the island.

Near the waterfalls, right next to the main road we find the temple Wat Khunaram. Quite an unusual equipment of the temples is the mummy of a Buddhist monk. Luang Por Daeng died in 1973. According to legend, he foretold his death and decided that he would leave this world during meditation. Then he ordered to build a glass coffin and his last wish was that his body would be exposed in the temple and strengthen the faithful in religion. The eyes of the monk are covered with Ray-Ban sunglasses (probably to not scare visitors more).

In the central part of the island, there is a garden, which is filled with small statues of people, gods, and animals. The entrance costs 80THB and the road is quite steep. The garden is not too big, but it is ideal for a short walk.

As in every tourist area of Thailand, on Koh Samui, you can find a Big Buddha. This one on Koh Samui was built in 1972 and is 12 meters high. It is located inside the Wat Phra Yai temple, which is located on the small island of Koh Farn near Koh Samui, with which it is connected by a bridge. To the Buddha, himself lead the stairs guarded by the statue of the  snake Naga. 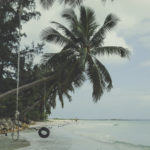 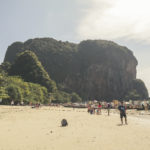