Being in Chiang Mai, I wanted to go even further north to Chiang Rai to see the White Temple. As these two cities share a distance of 200km, I decided that I would not rent a scooter without experience, for such a distance. The choice fell on a full-day organized trip by minibus. For 1000THB I visited not only the White Temple, but also the hot springs that are on the way, the Golden Triangle – the border of Thailand, Myanmar and Laos, and the village of mountain tribes – ethnic minorities residing in these areas.

The first attraction in the tour program is a Hot Springs. You can treat it like a toilet. In the car park, there are small fountains from which hot water spouts, and local people cook eggs in them. Not much interesting.

The snow-white temple, the construction of which began in 1997 and will last for another 50 years, impressed with the number of details. From the outside it is all white and in its elevation has small mirrors that reflect light. White color symbolizes purity, and the white glass symbolizes Buddha’s wisdom. To get to the temple you have to cross the bridge over a sculpture full of hands that symbolizes hell.

The interior of the temple is completely different, white color does not dominate here anymore. On the walls, you can see motifs are known from pop culture: Pokemon, Matrix, Star Trek, Marvel etc. Certainly, for the sake of copyright, you can not take photos inside, and the facility staff is trying to watch over it. Fortunately, I managed to make a couple of them.

The toilet located in the complex also deserves a small mention. In contrast to the temple, it is gold and has detailed decorations. This is probably the most dignified restroom in Thailand.

The next point of the trip was a visit to the village where the mountain tribes live. These include various ethnic minorities who came mainly from China during the Opium War. For an additional fee, you could go to the village of women with long necks, which were considered an additional paid attraction.

The last place we visited was the area called the golden triangle. Here we also had lunch, which was included in the price of the trip. The Golden Triangle – the border area of three countries – Thailand, Laos, and Burma. It covers an area of 350,000 square kilometers (More than Poland). At the end of the 20th century, the Golden Triangle was the largest producer of Opium and Heroin in the world. In the place where the borders of these countries meet on the Mekong River is the island of Don Sao, which was called the no man’s land and a drug market was there. Currently, it is a land dependent on Laos and there is something like the Duty Free market.

Link to the offer I used: https://www.travelhubchiangmai.com/tour-detail/t1010-chiang-rai-and-golden-triangle-tour.html 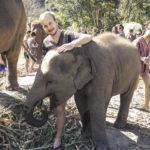 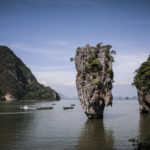