A city not far away from Bangkok. Perfect if we have too much free time in Bangkok. Certainly, it should not be on the list of mandatory places to see in Thailand.  In addition to the big Buddha, the Sanctuary of Truth and a piece of a fairly average beach there is nothing interesting there.

The city is famous for sex tourism. In the streets, elderly men are often fond of each other, often in the company of much younger, not always beautiful girls. Who likes. There is a fairly large Russian-speaking community in the city – this is evidenced by all the signs written in Cyrillic, Menus in restaurants are in three languages: Russian, Thai, English (the order is not accidental). Going to the temple of truth, I even came across an Orthodox church.

I spent only one day in this city and I do not regret that I did not stay longer.

How to get to Pattaya from Bangkok

The buses leave from the Eastern Bus Terminal at the Ekkamai station of the BTS (Transport in Bangkok). The trip takes about 3 hours. Coming to Pattaya, I decided on a minivan for 130THB which was my mistake. He stopped at many times to pick people along the way to be full. He did not get to the Pattaya station, instead, he stopped at three stops North, Center, South.

The large bus I traveled on the way back is definitely more comfortable. He drives faster and is cheaper (108THB). Buses leave from the main station in Pattaya every hour.

The Big Buddha statue is located in the Wat Phra Yai temple on a hill in the southern part of the city. It is the tallest Buddha statue in the province and reaches a height of 18m. It was built in 1977. The admission is free and the temple is open from 7 am to 10 pm. Just below it is a Chinese Taoist temple dedicated to Confucius.

The beach stretches across the entire city center. It is not very beautiful and it is far from paradise beaches. If someone lives in Bangkok and wants to go to a beach at the weekend, he will be happy. Everyone else should not. There are no views there, it is located just off the street and is narrow. I rested on her way from the great Buddha to the Temple of truth.

The Sanctuary of Truth is the main attraction in Pattaya. Contrary to appearances, it is not an old building under renovation. Its construction began in 1981, it continues and will last at least a dozen or so years. (The interior of the temple can only be visited in a helmet). It is made entirely of wood and reaches a height of 105m. Apparently nails were not used for construction. It is not just a Buddhist temple. It has decorations and figures from Thai, Cambodian, Indian and Chinese beliefs. The idea for its construction was born in the head of a Thai millionaire, which unfortunately did not live to see completion of construction.

At its central point, we can see pictures of the previous king, including a photo with John Paul II during a mission in Thailand in 1986.

Admission to the area where the temple is located costs 500THB, without buying a ticket we will not even see it. It can be visited between 8 am and 6 pm. 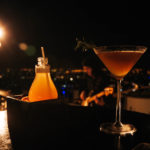 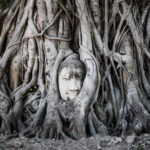 Ayutthaya in 1 day by bike