Temples belonging to a large circuit are less frequently visited than those belonging to a small circuit. This route includes Angkor Wat (as the most important temple is on both routes), Preah Khan, Neak Pean, Ta Som, Eastern Mebon, Pre Rup.

Similarly to a small loop, to move on a large one, you need a ticket. More about tickets in the entry: Cambodia, Siem Reap, Angkor Wat in 3 days

I hired a Remork driver for $ 20 to travel this route. He also provided bottled water and wet towels that saved my forehead while traveling between the temples. We started our day at 5 am by going to Angkor Wat for a sunrise.

We reach Angkor Wat before dawn. My eyes appeared a crowd of people occupying the best place to watch the sunrise. Was it worth getting up? The sunrise was very nice, but every sunrise with a clear sky is nice. Many people asked questions after sunrise: Is this already? That’s all? I certainly do not regret such an early wake-up call, but it is not something I could not live without.

The time just after sunrise is the best time to visit Angkor Wat. While most observers return to Siem Reap for breakfasts to hotels, you can take advantage of the opportunity that the temple is open from 5 am, and you are in it.

The description of Angkor Wat is presented in the entry about the Small Circuit.

After sunrise, we set off through Angkor Thom to Preah Khan. I got there at 7 am and the guards did not want to let me in. I had to wait 30min for the official opening. Apart from me, there was only one pair at this time, so we had all the temples just for ourselves. I can compare Preah Khan to Ta Prohm. Big trees grow on ancient walls. In the middle of the temple there is a Stupa, and going deep into the ruins you can find still working at Buddha’s altar. There is also Geocache hidden inside the temple. Next, to the temple, there is an artificial lake (Baray Jayatataka) on which there is another temple.

Neak Pean is on an island in the middle of a pond (Baray Jayatataka). To get to it, you have to walk along the footbridge. On the island, there is another smaller pond, and on it, again the island, on which there is a tower of the temple.

Ta Som is a combination of Ta Prohm and Bayon. It has buildings overgrown by trees and big faces. Everything only on a smaller scale.

Eastern Mebon lies on a dry pond (East Baray). It is one of the oldest temples in the area (it comes from Xw). You can see by the architectural style that it differs from that at Angkor Wat.

Like Eastern Mebon, Pre Rup is one of the older temples. It was devoted to the Hindu god Shiva.

Along the way, you can also stay in other smaller ruins, which I encourage. Especially in the area of Angkor Thom is full of them. Outside the complex, however, you have to be careful, because the area is full of landmines from the war. 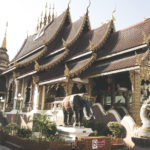 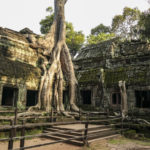