Budapest, once 3 cities: Buda, Óbuda and Pest separated by the Danube River, today one of the largest European cities and the capital of Hungary.

This weekend trip, in June, initiated my series of weekend trips, which is continued until now. On the basis of this three-day city-break, I decided to share practical information that will be useful when visiting the city called East Paris, or even encourage its visit.

How to get to Budapest?

As for me, the choice is obvious. Especially if you have a limited time only until the weekend. We chose WizzAir flights on Friday morning at 6:25 and at 7:40 we were already there. The return flight took place on Monday morning and at 9:25 we were back in Warsaw, a bit late, but we still managed to work on that day. We paid 154 EUR for flights for 2 people in 2 places. However, in promotions, you can find tickets already at prices from 10 EUR one way.

How to get from the Airport to Budapest?

By using public transport during the day you have 2 options:

During the night hours, only buses remain available.

Did you know that Budapest has the oldest metro in continental Europe? The M1 metro line built in 1896 is still in use and runs just below the street level.

The ticket check system is also from the previous century. Instead of gates and vending machines, there are controllers at each entrance to the metro, where you have to show a paper ticket.

In addition to 4 metro lines, you also have buses and trams in Budapest. Tram line 2, which goes along the Danube, is particularly nice.

Where to sleep in Budapest?

Accommodation in Budapest is not expensive, the houses can be beautiful. It is worth choosing an accommodation near one of the metro stations, and preferably in the center. We chose the apartment right next to the Kálvin tér station. For 3 nights we paid 153 EUR

What to see in Budapest?

After arriving from the airport to the center, we went to the Basilica of St. Stephen. The church is not old, it is not even 200 years old. Inside, you can see the relic (right hand) of Saint Stephen – the first king of Hungary. (Which is backlit after throwing 2 EUR)

After the basilica – a trip to Buda, on the other side of the Danube. A small trek uphill awaited us. But we finally arrived. We stand before entering the Fisherman’s Bastion. From the windows of a relatively young building, there is an excellent view of Pest and the parliament building standing on the banks of the river. During our stay in Budapest, The Redbull Air Race had place, thanks to which we could watch pilots’ acrobatics along the river.

The hill we climbed on is called the Castle Hill. There is a rebuilt Habsburg Palace, and inside there are two museums, the Budapest History Museum and the Hungarian National Gallery.

After descending the hill, we returned to the Pest side and on our way to our rented flat we got to the historic Great Market Hall, located in the vicinity of the Freedom Bridge.

The next day starts with a walk on the island in the middle of the Danube – Margaret Island. The park is the largest part of the island, which we walked around. Around the island, there is a path to run.

The building of the Hungarian Parliament is one of the most beautiful and the largest of such objects in the world. It is also a showcase of Budapest. It is best to watch it from Buda side. We went for a guided tour. Tickets cost 2,400 HUF for EU citizens and 6,000 HUF for other citizens. It is best to buy them for a specific date through the website in advance. In the middle, you can see the room vote and the royal insignia of Hungary – a crown with a crooked cross.

Szimpla Kert – in literal translation Simple Garden, is one of the so-called ruin . In old and vandalized tenement houses, instead of restoring it, pubs are opened. Everyone has an unprecedented and interesting atmosphere. Szimpla is a cluster of several such pubs around the courtyard of the tenement house. Other pubs that we visited were, for example, Ankert bar.

Passing through the Chain Bridge to the Buda side, we came to the Gellert Hill, which, of course, we entered. It stretches out from here the panorama of Budapest, especially nice during sunset.

Monument of the Millennium and the Vajdahunyad Castle

On the last day, we went to the Heroes’ Square Hősök , also known as the Millennium Square. In the middle of the square on a 36-meter column, there is a figure of Gabriel built in 1896 on the occasion of the 1000th anniversary of Hungary. Right next to the square, there is a city park and the Vajdahunyad Castle under which we had warm Kołacz cakes.

Shoes – Monument to the Memory of the Victims of the Holocaust.

Unfortunately, during this visit, we were unable to visit any baths or thermal pools Budapest is famous for. Next time we will definitely make up for it. The most famous and the biggest are, among others, the Széchenyi thermal baths in the open air or the Gellert thermal baths located on the hill of the same name.

What and Where to eat in Budapest?

Hungarians love to oily and slightly spicy dishes. And every dish must have peppers in it. A dish that meets both of these conditions is of course Hungarian Goulash.

For Goulash, we went to a place that resembles a wild west saloon – Pub For Sale. Loose straw is scattered on the floor and cards and bills left by guests are stuck on the walls and ceiling. You can find greetings or announcements on some of them. A large portion of goulash that lasts for 2 people cost us 1590 forints (5 EUR) to this we ordered 2 small beers at a price of 595 HUF each.

We met here with very unpleasant service. Later, however, it turned out that in most places in Budapest, the service behaves like that …

Langos – Hungarian pizza, is another dish that is clearly associated with Budapest. Langos is a deep-fried cake with the option of additions on it. Using the recommendation of friends and opinions of Google, we went to the metro station Arany Janos, where there is a pub “Retró Lángos Büfé“, which is said to serve one of the best Langos in the city. Justyna really liked it, but I will not become a fan of it. Depending on the selected extras, you pay from 300 to 900 forints (1-3eur)

In total for a 3-day weekend for 2 people in Budapest we paid: 400 EUR 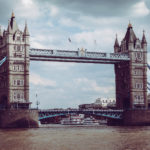 London for a Weekend 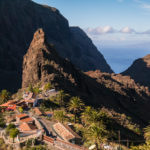