Quite close to the center of a city of several million population, just 2 stations by metro from the Lumphini Park, we can find an island. An island where time passes slowly. There are no skyscrapers, high car traffic, there are bicycle paths, parks and houses on stilts. This place is Bang Krachao island in Bangkok. I spent a nice and relaxing morning on it (unfortunately only the morning because from 12 o’clock I was already at work)

How to get to the Bang Krachao island?

From Bangkok, the fastest way is to get a boat from the north side of the island (south Bangkok) from the port of Klong Toey. You should head towards the temple of Wat Klong Toey Nok (วัด คลองเตย นอก). The easiest way is to take the MRT subway and get off at Khlong Toei or Queen Sirikit National Convention Centre. Continue on foot towards the church or use the taxi service on scooters. Just behind the temple is a small pier at which in the booth we will buy a ticket costing 10THB. Depending on your luck, you can sail a small boat or a little bigger boat. (On the way back, it is paid directly to the person who runs the boat, also 10THB)

Traveling around the Bang Krachao island

It is best to travel by bike on the island. Along the roads there are bicycle paths. The local park has a cycling route and parking lots. The bike can be rented immediately after leaving the boat at the pier at 80THB for the whole day. The price includes a bottle of water.

The main attraction of the island is Sri Nakhon Kuenkhan park where you can observe Thai fauna and flora. Around it stretches a bike path. At the time I was there (9am-10am) there was hardly anyone. Only you, Bike and Nature. 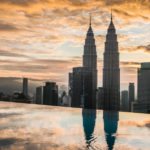