Have you ever thought about entering a cage with a tiger or a lion? In Thailand, there are zoological gardens in which there is such a possibility, and this attraction will definitely raise your adrenaline level. The first Tiger Kingdom was opened around Chiang Mai in 2008. Their second facility on the Phuket island was opened in 2013. I visited the first garden and from this perspective will describe my impressions.

How is it to meet a big cat?

In the beginning, we must decide which cat we want to meet. It sounds strange, but we can choose different sizes of tigers: the smallest, small, big or giant, and lions. Not always are all available, it can happen that there will not be the smallest cats in the garden. As for the meeting with the biggest tigers, it is a condition that you must be over 18 years old and over 160cm tall. Prices range around 700-1300THB for meeting a tiger. There are also packages consisting of several cats. I chose a lion and a big tiger. I paid 1000THB for such a set.

Tigers can be seen on their catwalks, walking around the zoo. If you do not want to go inside, then the ticket to the zoo costs only 250THB. Before entering the catwalk, we must leave backpacks, selfie sticks and other unnecessary things. We must have a free hand and be a reasonably good physical condition. Such to be able to do squat or react quickly if something happened. You do not go alone on the catwalk, there is always a tiger keeper with us. He gives instructions on how to behave on the catwalk. Among other things, you can not approach the tiger from the front, or stroke it on the head, because it may be considered as an incentive to play. Playing with such a big cat can end badly. The guardian will keep the tiger’s snack all the time, which he gives to him on a stick. We can approach and pet the tigers at this time.

Treatment and training of tigers

It’s hard for me to relate to it, how it looks from the back. I was only a spectator, the person under which this attraction was created. Before the visit, I read other blogs of people who worked in this zoo as volunteers, and according to their relationship, these animals are not harmed. They are subjected to training from a small age, but we also train dogs to correctly respond to commands. A lot of people accuse that cats are under the influence of drugs because when they come to see them, they sleep. According to the people who worked there and me, it’s nonsense. A person who has never had contact with a domestic cat who sleeps for most of the day may say so. Tigers are also cats that like to sleep. In Thailand, it can also be very hot during the day, which further affects sleepiness. So it’s no wonder if we come in the middle of a hot day, all the tigers will be napping. The best time to visit is early morning and evening just before closing time. Then we have the best chance that the cats will not sleep. I visited the park around 5pm o’clock and most tigers I saw then did not sleep.

While Tiger Kindom is a zoological garden in which they are looked after by employees and volunteers, some time ago there was a place run by Thai Buddhist monks – Tiger Temple. In 1999, the Monks took care of the abandoned young tiger. With time, tigers began to arrive, and in 2016 their number exceeded 150. Unfortunately, the monks turned out not to be as good as it might seem. Under the label of the temple, in which “harmless” tigers live next to them, there was a terrible act. June 1, 2016. Thai police entered the monastery and found a frozen corpse of 40 young tigers, and other parts of bodies ready for sale on the black market.

How to get to the Tiger Kingdom

The zoo is quite a bit out of town. 20km to the north. The easiest way is by taxi or Tuk Tuk. Every driver knows where it is and will want as much as possible. For the Tuk Tuk Tour in two directions, I negotiated a 500THB price and the driver waited for me in the parking lot during my tour. The one-way trip lasted about 40 minutes – all by traffic. For more information about Tiger King, please visit their official website.  https://www.tigerkingdom.com

More post from my travel through South East Asia{:} 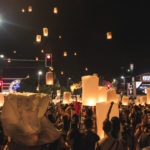