One Day in Bangkok

Visiting the monuments in Bangkok I planned for a week in which Justyna visited me in Asia. For to not repeat too many places. Such a trip can be done as a kind of citybreak during the weekend if you live on the islands or in some of the nearby countries. (Although I read about a London guy who on Friday after work got on the plane, visited Bangkok and was back in London on Monday).

If your first stop in Thailand is Bangkok, I invite you to read the entries about the first steps in this country (including where to exchange money, how to get from the airport, or how to get around the city).

To reach the first attraction of the day, we use the BTS queue and from the On-nut station, we get to the Saphan Taksin station, which is just next to Sathon Pier. Here, at the marina, we buy a ferry ticket for an orange line 15THB (Which was in itself an attraction – more about transport in Bangkok), which we reach to Wat Arun.

The full name is Wat Arun Ratchawararam Ratchawaramahawihan – in English “Temple of Dawn”. It is located on the west (right) bank of the river, i.e. not where most of the interesting things in Bangkok. Admission to the temple area costs 50THB.

After visiting the temple and the surrounding area, we returned to the eastern shore with a small ferry that transports people on the river in two directions. It cost us all 4THB per person. Our next point of travel was right next door.

Inside the Wat Pho there is a gilded statue of a reclining Buddha, which is 15 meters high and 43 meters long. (First, a monument was erected, and later a temple was built in which it is located). In this place were the first public university in Thailand and one of the oldest massage schools. The admission ticket costs 100THB.

The Grand Palace and the Emerald Buddha

The Grand Palace in Bangkok was the residence of the King of Thailand. There is a fairly large complex, which includes buildings, halls, gardens, and temples. There is a dress code in the whole area and men cannot go inside in shorts, which the police carefully scout. Just before the entrance, they sell loose pants at 100 THB, and the entrance ticket to the palace itself costs THB 500.

In one of the complex’s temples, exactly at Wat Phra Kaew, there is a small, 66 cm figure representing the sitting Emerald Buddha.

Bangkok is the capital of street food. However, if someone for some reason does not convince themselves of this form of meal, he can always visit one of the many shopping centers where Food Courtsare located. One of the cheaper ones is located in the Shopping Center Terminal 21 (at the Asok BTS station) and it is twice as cheaper than the one in the Siam Paragon shopping center and for 50THB you can already eat lunch.

After eating, it would be useful to relax. A good place to walk is Lumpini Park, where you can see freely living warans or at 18 o’clock everyone stands at attention and listen to the national anthem (From Terminal 21 can get here directly by the MRT subway)

Bangkok has much to offer also after dark. You can go for example:

I presented here a very short but intense plan to explore Bangkok. However, if you have more time to spend in this city, I also recommend other attractions that the city of angels has to offer. I presented the list of attractions in this entry: link 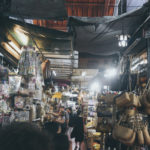 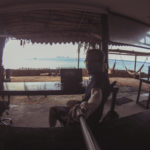