The former capital of Thailand, which in the glory days of the city was called the Kingdom of Siam. At the turn of the 17th and 18th centuries, its population reached 1 million inhabitants as much as total in Paris and London at the same time. It was destroyed by the Burmese army in 1768 and abandoned. Then the capital was moved to Bangkok, which began to develop from this memorial, and Ayutthaya overgrew the forest. Currently, it is a town with 66 thousand inhabitants.

Is it worth seeing Ayutthaya?

Ayutthaya is above all the ruins of temples from the time of its magnificence. If during your trip in this region you did not have the opportunity to go to Cambodia and see the ruins of the temple in Siem Reap, it certainly is. If you have already seen them, it is also worth seeing and these Thai ruins.

How to get to Ayutthaya from Bangkok

Ayutthaya is located north of Bangkok and can be reached by train leaving the Hua Lamphong station, which is located next to the MRT final metro station of the same name (Transport in Bangkok). A ticket in the third class, without a seat guarantee, costs 20THB and the journey lasts about 2 hours. (of which 1h through Bangkok)

There is a bicycle rental opposite the train station. The bike costs 50THB for the whole day. In the pledge, we can leave a photocopy of the passport. Unfortunately, there are no bicycle paths everywhere. You have to be ready to cross the river, a 4-band bridge, right next to the cars.

Some of the temples belong to the Ayutthaya Historical Park and are paid, and some are not. A single entry ticket for each of them costs 50THB. For 220THB, a ticket is combined to all 6 paid parishioners. Below prepared the route you have traveled alone and in such a order placed temples in this entry.

More post from my travel through South East Asia{:} 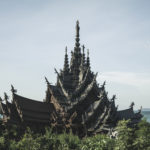 Pattaya in 1 day – Sanctuary of Truth 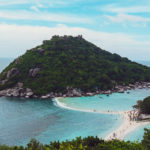