The largest island of Thailand and the tourist capital of the country. It is located on the Andaman Sea,  connected with the mainland by a bridge. According to me, it’s such a small Thailand in a nutshell. You can find here theme parks, zoological gardens in which you can see up close elephants and tigers, tourist resorts with night clubs, great beaches. In the middle of the island, you can go trekking in the forest in its hilly/mountainous terrain, see the statue of the great Buddha and go to the far-off islands of Koh Phi Phi.

The island operates an international airport, from which fly low-cost airlines such as AirAsia (eg 14 flights a day to Bangkok) and large traditions airlines such as Qatar Airways or charters from Poland. The airport can be reached by taxi at 400-500THB or by bus for 100THB.

Phuket – the last place I visited during my visit to Thailand. I got to the island from Krabi with a stop on the Phi Phi Islands. I lived in the center of Phuket Town, where I was close to the Port after arriving and there was a bus station from which the bus to the airport departed. Unfortunately, these were the only advantages of this place. In retrospect, I would choose accommodation near Patong Beach. As my stay was limited to a little over one day, I decided to buy a full-day tour of James Bond Island for 1800THB at the hostel. I know perfectly know that I could buy that trip cheaper, but in my area, there was no travel agency and it was quite late to look for that somewhere further.

In the morning I was approached by a minibus, which also started its journey in Phuket Town, which meant that it would gather people from all over the island. Also from Patong Beach. The trip to the first attraction lasted a total of 3 hours, and it was the Monkey Cave. In the cave, there is a 15-meter monument of a lying Buddha, and at every step, you can come across monkeys running everywhere.

After the cave, we went to Phang Nga Pier where we changed to a boat (longtail boat). There, we crossed the bay of the national park Ao Phang-nga admiring the impressive small islands.

The island where we have stayed in Koh Panyee (เกาะ ปันหยี – like all Thai names, there is no unambiguous English spelling). On the island, there is a village “on the water” inhabited by about 1500 inhabitants, mainly Muslims, descendants of fishermen from Malaysia, who are now called Thai gypsies. In the past, when the Thai law allowed only to buy land by Thai people, the fishermen decided to build their first houses on stilts. Later, when the law changed, they built a mosque and a fresh water intake. We also had lunch here.

Another point of the program was the famous James Bond island, and more specifically Ko Khao Phing Kan. In the movie The Man with the Golden Gun, shot in 1974, the hideout here had an antagonist James Bond. Just before the island, the distinctive rock Ko Tapu emerges from the sea.

The last point of the trip were kayaking around one of the islands in the Ao Phang-nga national park. Unfortunately, there was no possibility of rowing alone. In the middle of the water, you could buy a beer for 100THB. After all, we returned to the marina and from there the minibus brought back everyone around the island. Of course, Phuket Town was at the very end and the return lasted 3 hours.

At the end of the day, together with Tomas from Slovakia, whom I met on a trip, we decided to go to the party part of the island – Patong Beach. This is where the party street of the island and all the clubs are located. Such a combination of Soi Cowboy and Nana Plaza with Khao San Road, known from Bangkok. The route in both directions was made on a rented scooter. 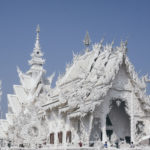