This fall, EasyJet launched a direct connection between Warsaw and Berlin. One way ticket prices start below 25 EUR. We decided to take this opportunity and go on a weekend city break. Our main goal Christmas markets. However, this post will not be about them. Here, I described the main attractions of Berlin, which we managed to visit, while the entry about markets can be found here.

Berlin has a well-developed public transport network. Fast city train (S-Bahn), Metro (U-Bahn), trams and buses will take you wherever you want. A single ticket costs 2.80eur and entitles you to ride with transfers for 2 hours. All-day ticket costs 7eur. Tickets can be purchased from vending machines that accept cash and card payments (eg MasterCard Revolut). We started our adventure with Berlin at Tegel airport and to get to the center we caught a bus line TXL, which runs on the route Airport – AlexanderPlatz passing the Brandenburg Gate on the way. (Timetables and bus routes available at https://www.vbb.de/en/)

The first and probably most recognizable attraction of Berlin is the Brandenburg Gate. Rebuilt after the war, it became part of the wall dividing Berlin to the east and west.

Near the Brandenburg Gate is the parliament building of the German Bundestag. It is popular to visit his dome, but to do so you must pre-book an Internet entrance (link). The number of entries is limited. Unfortunately, we did not manage to find free tickets on the date we visited Berlin.

Heading south, we will find a monument commemorating the genocide of Jews made by the Germans in World War II.

AlexanderPlatz is the main square of East Berlin. Next to it is Berliner Fernsehturm – TV tower with a height of 368m. At a height of 203m, there is a bar with a viewing terrace.

Remains of the Berlin Wall transformed into a street art gallery. Shortly after the fall of the wall, 118 artists turned its eastern fragment into an open-air gallery. The most famous is graffiti depicting Leonid Brezhnev and Erich Honecker kissing each other.

At the time of the division of Berlin, it was a border crossing between the zones ruled by the Americans and the Soviets. Today, there is a watchtower serving as a tourist attraction, under which you can take a picture with extras clad in American uniforms.

Although there are a lot of different museums in Berlin, the biggest and most important are on the museum island. Eg. The Pergamon Museum with the Ishtar Gate or the altar of Zeus and Museum, Altes Museum, Bode Musem. Full-day admission ticket costs 18eur (9 version for students)

Hoffs are picturesque courtyards in the Mitte district connected to each other in one large complex. You can find here shops, bars restaurants, and each courtyard is different.

During the Cold War, it was divided in half by a wall. Today, the business center of central Berlin. You can see here the Sony Center square which is covered with a large canopy.

What and where to eat in Berlin

You can not be in Berlin and not eat sausages with Curry (Currywurst). For this speciality, I went south from Charlie checkpoint to Curry 36 next to the Mehringdamm U-Bahn station.

Berlin is not just sausages. In Germany there is a very large Turkish diaspora, which brought its cuisine to this country. One of the better kebabs (Mustafa’s Gemüse Kebap) can be found right next to Curry 36. You have to stand in line, sometimes even two hours. We only stood for 10 minutes, but if I had to stand 2 hours I would think that it is not worth it.

Near our there was an Asian Transit restaurant, which offers very good food sold in small bowls for 3.5 each. Ordering procedure is similar to that in Hong Kong’s restaurants, by marking a position with a pencil on a piece of paper.

As our base we chose The Circus Hostel, which is located in the north of Berlin’s central Mitte district. 10 min walk from Alexander Platz. At check-in I get a beer voucher at the local bar.

Trivia: In its basement there is a mini museum dedicated to actor David Hasselhoff.

During the trip we incurred the following costs:

Together with attractions at Christmas fairs, meals and all other costs, a 3-day stay in Berlin cost us 489eur.

If you come to Berlin during the Christmas season, then you can not miss the Christmas markets. Here you can find a list of interesting markets 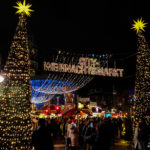 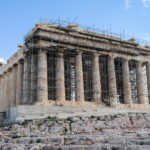 Weekend in Athens – A Complete Guide